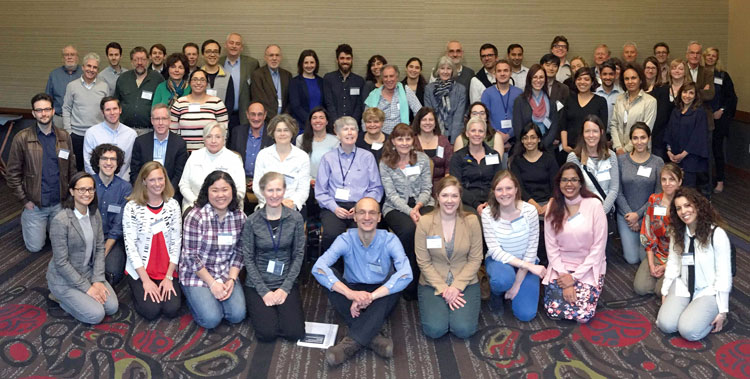 An important measure of how the NBIA Disorders Association has expanded its global influence was on display at the 6th International Symposium on NBIA & Related Disorders.

The scientific meeting, held April 7 and 8 at Skamania Lodge in Stevenson, Wash., attracted a record number of early career researchers who received travel awards covering expenses to attend the meeting. In all, 13 received such grants representing 11 countries, compared with just three at the last symposium, in 2014.

The increase is an indication that more scientists are interested in NBIA may choose to continue studying it. The symposium provides a forum for researchers to share information and common interests, laying the groundwork for potential collaborations in the future.

In addition, the symposia are now held more often than every five years, as our first three were, in 2000, 2005 and 2010. This year’s meeting attracted 70 researchers, industry representatives and patient advocacy group representatives from 12 countries.

The organizing committee was led by Dr. Susan Hayflick. She had help from others on the committee, including Drs. Manju Kurian from University College London and Ody Sibon from University Medical Center, Groningen, Netherlands, and me representing NBIA Disorders Association.

Grants from the National Institute of Neurological Disorders and Stroke, the National Center for Advancing Translational Science, the Office of Rare Diseases Research, the Movement Disorders Society and OHSU made the symposium possible.

Hayflick wrote in the symposium program welcome, “We are a small but mighty community of investigators, clinicians, parents, trainees, and biotech and pharma company representatives. We may differ in what initially drew us to this field, but we share a common goal to improve the lives of people with NBIA disorders. “

This symposium, thanks to support from our industry partners, Retrophin, Inc., who donated $25,000 and ApoPharma, Inc., who donated $7,500, we were able to invite 15 early career research applicants to attend, and for seven NBIA Alliance member organizations to send patient representatives to the symposium and have a day-long meeting on the day prior to the symposium to work on Alliance activities.

Each applicant agreed to present a poster of their NBIA work at the symposium poster session. In addition, 7 were invited to give an oral presentation and audience members discussed their work and exchanged ideas and suggestions for future areas to explore.

Suh Young Jeong, PhD, from OHSU was one of the early career researchers that presented orally and discussed how reduced oxygen (hypoxia) and unhealthy mitochondria will cause metabolic changes in cells with PANK 2 mutations and result in excess iron accumulation in the cells. She also discussed a potential therapeutic that might recover mitochondrial activities and trigger restoration of iron homeostasis in PKAN cells.
Ana Messias, PhD., from Helmholtz Zentrum in Munich, Germany, was another that gave an oral presentation of her poster. She shared her work on the study of C19orf12, a protein of unknown function, whose mutations are linked to MPAN. She shared her studies on nine known MPAN mutations and showed that for most of them there is an indication of lower stability, and significant structural changes. She discussed many avenues to explore in finding the protein function and its role in the biochemical pathway and mechanisms in the cell.

Both of these researchers received research grants in 2015 from our organization to help them in their work.
Members of our Scientific & Medical Advisory Board that were among those speakers that presented their work were Drs. Penny Hogarth, Paul Kotzbauer and Suzanne Jackowski.

The early career researchers expressed appreciation for an opportunity they wouldn’t have had otherwise to learn, network, and become a part of our growing NBIA community. Once home, one young man sent me an email saying that he was now collaborating with other researchers he met at the symposium and felt the experience was invaluable.