This 27-month study will be led by an experienced MPAN researcher, Dr. Arcangela Iuso from the Helmholtz Zentrum München in Munich.

Iuso’s goal is to reveal the cellular function of the C19orf12 gene and the protein it produces. MPAN is caused by a mutation in this gene and understanding how it functions is important to developing potential therapies. Specifically, Iuso and her team hope to understand the protein’s role in lipid metabolism, which is the breakdown of fats within the cell to store energy.

Iuso’s team hypothesizes that the normal functioning of the C19orf12 protein is disrupted, which could lead to an abnormal accumulation of cell products, such as lipids or iron. This can be the cause of the iron accumulation in the brain, a hallmark of NBIA disorders.

Hoffnungsbaum e. V., reports that the research team will include many cooperating scientists, such as Dr. Benjamin Engel at the Helmholtz Pioneer Campus. The organization went on to say that the laboratory will use a new technology called cryo-electron tomography to produce a three-dimensional image of the cells with fine molecular detail. By directly imaging proteins in action, cryo-electron tomography provides molecular insights into cellular processes and thus into disease mechanisms. The Iuso and Engel groups will image cells from MPAN patients, according to Hoffnungsbaum e.V.

Funding for the work was made possible from numerous fundraising campaigns and individual donations to Hoffnungsbaum e. V. Once researchers are able to understand the mechanisms of the disease, they can pave the way for developing treatments for MPAN and other NBIA disorders. 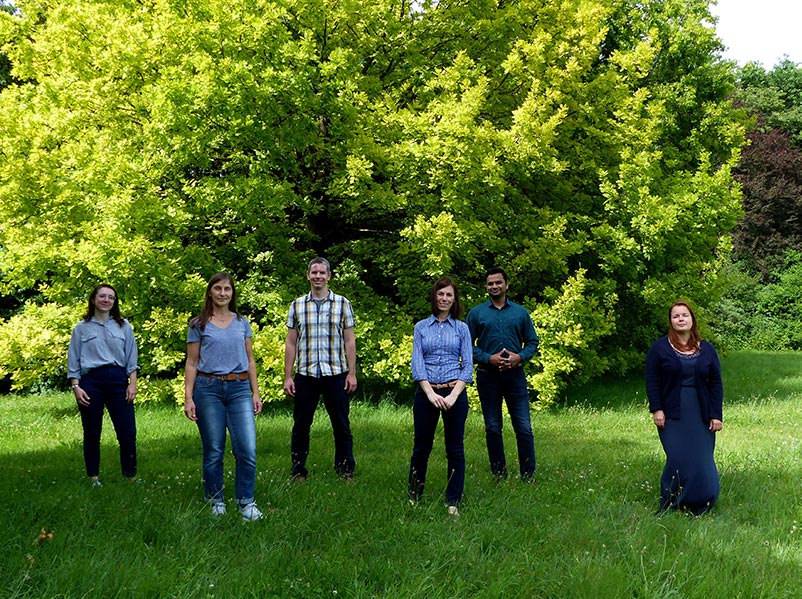 Collaborating partners for the MPAN research team investigating the role of C19orf12 in cell lipid metabolism are from left: PhD student Enrica Zanuttigh of Helmholtz Zentrum München, Dr. Lucia Berti of the Institute for Diabetes Research and Metabolic Diseases of the Helmholtz Center Munich at the University of Tübingen, Dr. Benjamin Engel at the Helmholtz Pioneer Campus in Munich, project leader Dr. Arcangela Iuso, early-career scientist Dr. Tilak Kumar Gupta, and technical assistant Annett Hering from Helmholtz Zentrum Munich. Not pictured: Dr. Sophie Ayciriex from the Institute of Analytical Sciences at the University of Lyon, France.