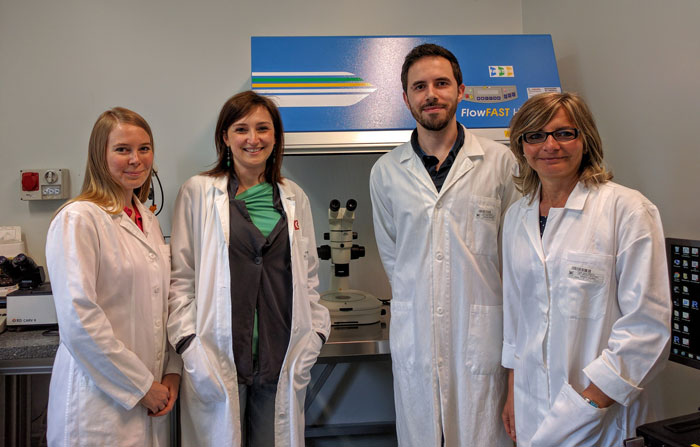 A lab in Italy working on the role of coenzyme A in NBIA received a grant of 16,500 euros in June from the Italian Association for Neurodegeneration with Brain Iron Accumulation (AISNAF).

The funding, which could be renewed at the same amount, will enable the lab to continue its work on CoA for six months while waiting for larger grants to come in.

In addition to this work, the lab also has access to another molecule that has been synthesized and developed by AciesBio, a biomedical company in Ljubljana, Slovenia. This access was made possible thanks to the collaboration established working together under TIRCON, a European Union grant that had as one component finding a pantethine derivative to help in the treatment of PKAN.

Both research avenues are aimed at finding out whether they could lead to effective therapies for patients with PKAN, the most common form of NBIA.

The AISNAF money came as a fellowship award to Ivano Di Meo, a young investigator working in the lab of Dr. Valeria Tiranti at Istituto Neurologico Besta in Milan, Italy.

Tiranti is one of the world’s most productive NBIA researchers and recently identified mutations in the COASY gene, which is responsible for the NBIA disorder called COASY Protein-Associated Neurodegeneration or CoPAN.

COASY stands for Coenzyme A synthesis, which refers to CoA’s significant role in metabolism.
Low CoA levels are seen in fruit flies (Drosophila) with PKAN mutations and in mice lacking both PANK1 and PANK2 genes. PKAN, or Pantothenate Kinase-Associated Neurodegeneration, is caused by mutations in the PANK2 gene.
Because PKAN is linked to an imbalance in CoA, Tiranti’s group has found that boosting CoA in human cells, roundworms and fruit flies affected by PKAN has the potential to rescue the animals or cells from the disease.

The AISNAF-funded fellowship will extend CoA rescue experiments in normal mice exposed to Hopan, a drug that is a chemical inhibitor of pantothenate kinase and causes a dramatic decrease in liver and kidney CoA levels. That causes the mice to become lethargic and die within five to six days.

Di Meo will rapidly test the potential rescue capacity of CoA to see whether it prevents lethargy and premature death in these mice.

The researchers hope the work on CoA and the compound created by AciesBio will pave the way for future clinical trials for PKAN individuals.