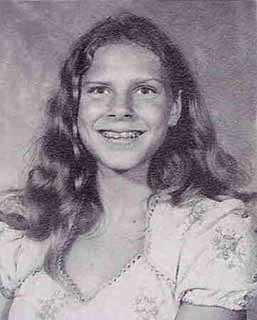 Joyce Marie Pfister was born on November 2, 1956. She was the fifth daughter and fifth of six children. Joyce was very active as a young child and as a early teenager. She was a beautiful girl with long, waist-length blonde hair, blue eyes, and a cute little turned up nose. She was diagnosed as being hyperactive in school for lack of anything better to explain some minor problems she was having in doing her school work. At about 17, her mouth began to hang open, she started to walk on her tiptoes, and her hands began to curl up. When she was 19, she started losing her ability to speak. At that time, no one knew what was happening to her. Our family doctor referred her to a neurologist who sent her to Mayo Clinic. It was here that she was diagnosed with possible Hallervorden-Spatz Syndrome. At that time, they could not be absolutely sure because the only way to tell for sure was post-mortem.

In 1985, Joyce had a tracheotomy and a stomach tube put in. Joyce remained totally cognizant during her entire illness and was very intelligent. She was cared for tenderly by her parents until her death on July 11, 2000. Joyce had a very peaceful death for which all those who loved her were very thankful for. We loved Joyce very much and will miss her until we see her again in heaven.

God’s blessings on you and your family,
The Robert & Kathryn Pfister Family

*An informational item: toward the end of her life, the doctor put her on a drug, Elavil, and she could talk for a couple of weeks, and then it was no longer effective. She had not spoken for over twenty years.