Looking back, there were signs that my brother, Brian, and I were heading to a medical crisis. But no one thought of NBIA (Neurodegeneration with Brain Iron Accumulation) when we were kids. We wouldn’t know those words until much later.

I remember when we were growing up that Brian fell a lot. He also stuttered and went to speech therapy. As soon as he would stop the speech therapy, the stutter would come back.

I didn't have any problems speaking — not then. But I had trouble swallowing and went to therapy for that. The real trouble began 11 years ago, when Brian was 15 and I was 17. His gait changed. He started dragging one foot, prompting visits to many doctors and numerous tests.

Finally, at Sick Children's Hospital in Toronto, doctors said his symptoms meant he either had Wilson's disease, which they could manage with drugs, or the incurable Hallervorden-Spatz Syndrome, the former name for NBIA. Doctors sent his blood to Chicago for a DNA test because researchers in Oregon had recently discovered the misspelled gene for the most common form of NBIA, known as PKAN (Pantothenate Kinase-Associated Neurodegeneration). The results came back: Brian had PKAN.

I remember getting the news: My mom and I cried; we couldn't believe it. Brian was going to need a lot of help. At the same time, I was having problems with my hands and my jaw. They tried pulling my wisdom teeth and gave me a retainer and considered braces thinking my jaw was out of line, but that wasn’t the problem.  Then the doctors ordered the same DNA test of my blood. Their suspicions were right. I had PKAN, too.

Next, my parents were tested. Each had the misspelled gene. My older sister was found to be a carrier, but she does not have the disease.

The diagnosis was like a nightmare that had become real. The disease wasn't going to go away without a miracle. Brian and I were only the second cases doctors had ever seen at Sick Children's; the first was a long time before us.

But good things also came to me and Brian. While at Sick Children's, we each received a wish from Starlight Wish Foundation. I chose a shopping spree at the Eaton's Centre and got to stay in a very nice hotel in Toronto. A limousine toured me around the city. Brian chose a trip to Disney World in Florida. We each had an amazing time.

We then went to Bloorview Kids Rehab, a center for disabled children, for therapy. We met wonderful doctors, nurses and therapists. When I was in rehab I did exercises to strengthen my legs.

Brian went to therapy for his walking and did exercises that helped him walk straight and strengthen his legs and back. He went back to speech therapy and learned how to talk slowly and clearly.

Most of our therapy lasted a year to a year and a half and was once or twice a week, although Brian's leg therapy initially was three to four times a week. It was very beneficial. He went from leaning back far when he walked to walking almost normally. My swallowing therapy also worked very well.

We also got great care at TorontoWesternHospital and went to Oregon for a study and a battery of tests, including eye tests, blood tests, MRIs and psychological tests. We had tons of forms to fill out.

In Oregon, we met Dr. Susan Hayflick, Dr. Penny Hogarth and Allison Gregory. We also met some of the researchers who work behind the scenes on our disease, which was nice for us and them. They could put faces to the research. The food was great, and Oregon was beautiful. From the hospital, we had a view of the mountains, the ocean and huge trees.

I had been getting Botox injections in my jaw but stopped because they were very painful and not much help. I never had a speech problem until I was a university student and the Botox got into my voice box and temporarily paralyzed part of it. I was sitting in class and tried to answer a question but could not say the letters B, S and then about half of the alphabet. After the Botox wore off, I still had trouble speaking and I asked my teachers not to ask me questions in class, and they didn’t.

Today, Brian and I both take Artane, as well as baclofen, pantothenic acid (B5 vitamin) and clonazepam. I take clonazepam for painful, tight muscles in my chest, which only happens about twice a month.  I stretch every day. Mom and I go to yoga classes every week to help my balance, strengthen my body and help relax me.

Brian and I both went through speech therapy last year because we sometimes run our words together and don't speak very loud.

I currently once again get injections of botox in my neck for a head tremor; under my chin to control my jaw from pulling down; and in my arm to control a finger twitching.

Brian also gets the botox injections in his shoulder to control his arm from shaking; in his legs to loosen the tight muscles; and in his foot to help him not fall as much. His walking has improved dramatically since we were diagnosed.

We are still going to TorontoWesternHospital where we receive great care from Dr. Anthony Lang. He is a world-renowned movement disorders neurologist, and we are so lucky to have him. He treats patients with similar neurological problems, such as Parkinson's and dystonia.

Brian is now 26 and not working at present. I am 28 and have a degree in medical administration from DurhamCollege in Oshawa, Ontario and as an MDA. I currently work part-time at a small hospital.

My favorite things are reading, shopping, hanging out with friends, going on the Internet, chatting on the phone, watching TV and movies. Brian enjoys playing video games, watching TV, hanging out with friends and the Internet. We both help out around the house and Brian enjoys cutting the grass and I do a lot of gardening with my Mom. I also enjoy doing make-up and may look into becoming a make-up artist.

We’ve also struggled in the last few years. My mother was diagnosed with breast cancer, which was very hard for our family. She has had surgery and radiation. Now, on cancer medications, she is doing well and we are hopeful.

Some people wonder how we do it and the only answers we can give are God, amazing doctors, awesome health care and wonderful parents who are very understanding, a great support and will help with anything. When we have an issue we pray and God helps us get through it. We have come to see that no bad situation is ever permanent. There is always good news after the bad.

One of the best things that we have done is connect with the NBIA Disorders Association. We attended our first NBIA Family Conference in May 2007 in Cincinnati and had a blast. We saw doctors and researchers from Oregon again and met families who have the same problems we have. We learned about therapies that have helped others and made new friends. I now e-mail with people I met from all over the world — from India to Iceland to Texas— and as close as three hours from home.

We are going to be attending the NBIA conference again this year and love going. We can be ourselves and not worry about what people think because everyone understands.

Right now, Brian and I are doing so well that if you didn't know us you wouldn't know anything was wrong with us – at least most of the time! 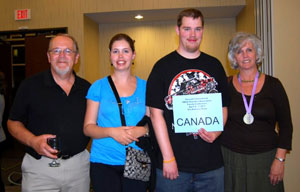