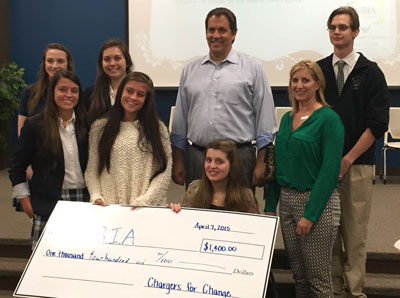 Each year students in the Chargers for Change organization at the June Shelton School hear presentations from groups and allocate their budget to support various programs.

This year the students heard from groups working in suicide prevention, child abuse and refugee relocation, as well as a presentation from Philip Verges, whose daughter, Madeleine, was a former student at the school and has NBIA.

The group awarded a significant portion of their budget to NBIA research. The awards were announced at an upper school assembly on April 7, and the Verges family was there to accept the award on behalf of the NBIA Disorders Association.

Parents of a Shelton School graduate in 2012 created Chargers for Change with a donation and a goal of teaching students about best practices in philanthropy. The students work with the Dallas Foundation to identify projects that make a difference in the world.

“This family made a very generous donation to the Dallas Foundation to be used by our group. We allocate only the interest from their gift, so the fund will be here forever,” said Brittani D. Trusty, the foundation’s program officer. Officials with the NBIA Disorders Association said they are grateful to Chargers for Change and will be using the donation to help fund a research grant to be awarded later this year.