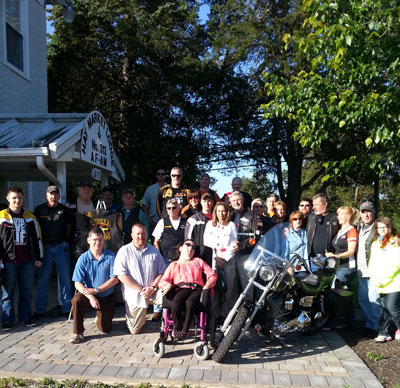 Hay Market Masonic Lodge No. 313, in Haymarket, VA., is an avid supporter of NBIA research.

Rich and Sandy Leap’s daughter, Brittany, has NBIA, and they live in Haymarket. An article in the town newspaper in 2006 caught the attention of Bro. Bruce Silvernale – then Junior Warden of the Lodge.

Silvernale approached the Hay Market Masonic Charitable Foundation and asked if they would participate in a fundraiser for NBIA research. And for the past seven years every Memorial day, all the Masonic groups in the area and other attendees enjoy a free breakfast and the Foundation matches any donations received for NBIA research at this event, up to $5,000. Donations are now over $38,000.

Also every year many participate in the Rolling Thunder “Ride for Freedom” where motorcycle riders meet at the Pentagon and ride into Washington D.C, pass the Vietnam Memorial and end up at the National Mall, to honor military veterans and those in the armed forces missing in action. For more information on this story, SEE THIS ARTICLE which appeared in The Scottish Rite Journal, July/August 2014.