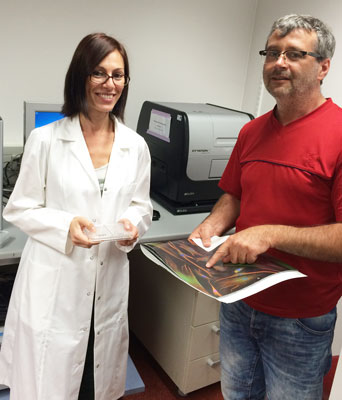 With a grant from our sister organizations in Switzerland and the Netherlands, researchers in Germany are testing potential treatments for MPAN, a form of NBIA.

The scientists plan to use the grant of 50,000 euros from NBIA Suisse and Stichting Ijzjersterkthe to test about 200 drugs and nutritional supplements that might help MPAN patients. They will screen those compounds in a fruit fly model of MPAN.

They also will use a type of skin cell known as fibroblasts, donated by an MPAN individual, to create neuronal cells, the kind that may be affected by MPAN.

MPAN is an abbreviation for Mitochondrial-membrane Protein-Associated Neurodegeneration, which is caused by mutations in the C19orf12 gene.

Drs. Arcangela Iuso and Holger Prokisch from the Institute of Human Genetics at the Technical University of Munich said the grant will cover their project, “Development of treatment strategies for MPAN,” for a year. Based on the results and the availability of future funding, the project could be extended up to four years.

The fruit fly is often used as a genetic tool-box to alter the expression of a gene so that researchers can then observe the resulting changes. Scientists found that with a moderate reduction of C19orf12 expression, the fruit flies had problems moving from one location to another, as well as uncoordinated movements upon stressing, shortened lifespan, and loss of neuronal tissue. However, when the expression of C19orf12 is strongly reduced, the fruit fly undergoes a developmental arrest. This means that flies, whose development proceeds through consecutive stages (eggs, larvae, pupae, adult flies), are not able to develop beyond the pupal stage.

The scientists will use those flies with developmental arrest for screening supplements and drugs which have been approved by the Food and Drug Administration as being safe and effective for neurological disorders. Compounds restoring the ability of the flies to develop into adults have the potential to be beneficial in cases of MPAN.

Once potentially effective “candidate” drugs are found, the researchers must test them further on the MPAN fly model with moderate reduction of C19orf12, to assure the correction is related to the neurodegenerative process and not for other reasons.

At the same time that work is being done with fruit flies, researchers will work on the skin cells donated by an MPAN individual. Those are the only type currently available, but are probably not the best for studying processes that happen exclusively in neuronal cells. Consequently, researchers will alter the skin cells to establish stem cells that can develop into any kind of human cell, which are called induced pluripotent stem cells or (IPSCs). Those stem cells will then be used to derive the necessary neuronal cells.

If these new neuronal cells show the neurological signs of MPAN, as researchers hope, they will provide a rich source of cells and a better option for testing compounds that might halt the disease.