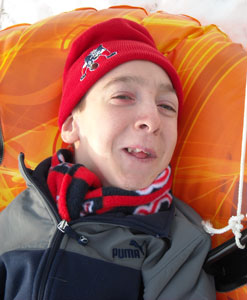 In memory of a favorite son and brother.

Eric was a second son with a big brother he adored. And all of us adored Eric.

He was kind, smart, fearless and determined. Those traits served him well throughout his life.  He was remarkable in enduring pain and overcoming his limitations. He could communicate with expressions better than most of us communicate with speech. He had a beautiful smile and his eyes said it all. He often expressed his love with hugs, and we all looked forward to Eric's return from school -- and a nice, big hug.

Eric had a wonderful sense of humor.  He never missed a joke, not even the subtle ones.  A slip of the tongue or a remark made without thought were enough to provoke a smile. And when his smile gave way to laughter, he pulled in everyone along with him.

He liked to 'one up' the rest of us with his exploits, and the school he attended encouraged him to be adventurous. He was the only one of us to go wind surfing, the only one to go water tubing.  We’ve yet to see a Red Sox no-hitter, but Eric was at Fenway Park when Jon Lester pitched a perfect game in 2008. Eric even got into the dugout. He didn’t have a long life, but the time he had was rich and filled with wonderful friends and caregivers.

He was always engaging, especially with the ladies. In his teens he became a decided flirt.  With so many doctor appointments and hospital stays, he always found a nurse or doctor or receptionist to bat his eyes at. The elevators weren’t off limits, either. They were another opportunity to engage a new friend.

It is the parents' role to teach their children, but it was Eric who taught us patience. We drew strength from him, too. He was the brave one. He never questioned, "Why me?" He simply forged ahead with a smile, looking for fun and friends.

We are honored to have been his family and will miss him forever. We are truly grateful we were with him when he passed and that he is now pain-free and at peace. He was a remarkable boy.