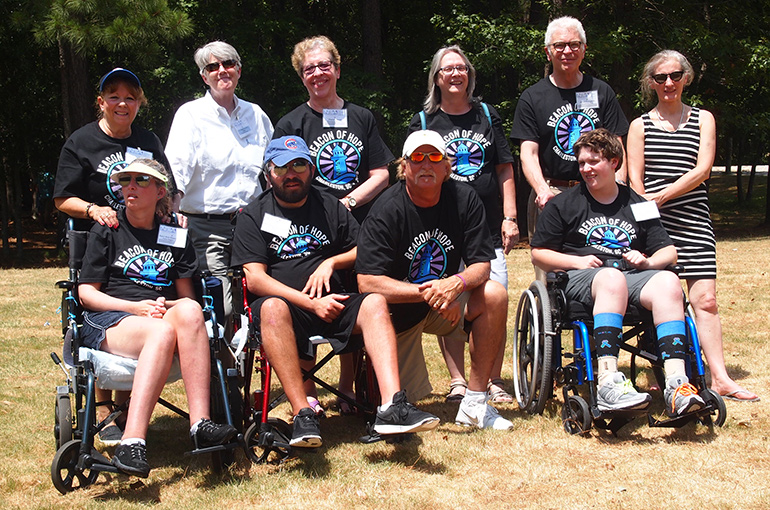 Mitochondrial-membrane Protein-Associated Neurodegeneration is caused by mutations in the C19orf12 gene. This gene is found on chromosome 19 and is believed to play a role in fatty acid metabolism. Though ultra-rare, it is one of the more common forms of NBIA and has distinctive clinical symptoms that differentiate it from other forms of NBIA. The prevalence of MPAN is roughly estimated at less than one in 1 million.

Onset typically occurs in childhood (ages 3 to 16, considered juvenile onset) to early adulthood (ages 17 to 24, considered adult onset). However, some individuals are reported to have a much later onset, resulting in a slower progression and survival well into adulthood. There are a few instances of later onset with rapid progression of disease. It causes cognitive decline progressing to severe dementia.

MPAN is characterized by spasticity that is more prominent than dystonia. There is weakness in muscles caused by motor axonal neuropathy, optic atrophy, and neuropsychiatric (mental disorder due to disease of the nervous system) changes.

Most affected individuals are still able to walk as they reach adulthood. Psychiatric signs are common, including impulsive or compulsive behavior, depression and frequent mood changes. Unlike most other forms of NBIA, the vast majority of individuals with MPAN develop progressive cognitive decline.

Click on any of the thumbnail images below to view the photos in a larger size;
move cursor to upper right of picture to click on next and view as slideshow

The following clinical findings are suggestive of a diagnosis of MPAN:

Commonly, all age groups experience a decline in cognitive ability that progresses to dementia; prominent neuropsychiatric abnormalities; and movement problems caused by nerve-cell abnormalities. Studies reveal a loss of nerve cells, widespread iron deposits and abnormal axons (a part of nerve cells) called spheroid bodies, in the basal ganglia. Lewy neurites, which are abnormal clusters of protein that develop inside the nerve cells, are present in the globus pallidus, and Lewy bodies and neurites are widespread in other areas of the midbrain and in regions of the globus pallidus called the corpus striatum.

Neuropsychiatric symptoms may require treatment by a psychiatrist.

Medical providers also may seek to manage the disease by performing regular eye exams, as well as neurological tests for dystonia, spasticity and parkinsonism. Children may benefit from a pediatric neurology assessment to establish care and continuity. Adults may benefit from a referral to a movement disorders neurologist or a neuromuscular clinic. This may include evaluation of the affected individual’s ability to walk and speak for possible physical, occupational and/or speech therapy.

For treatment of dystonia/spasticity, consider oral baclofen, trihexyphenidyl, intramuscular botulinum toxin or taking part in a trial of intrathecal baclofen under a physician’s guidance. For parkinsonism, consider pharmacologic treatment under physician guidance. For severe dysphagia (swallowing difficulties), consider nutritional and vitamin supplementation to meet dietary needs or a gastric feeding tube to minimize weight loss and decrease risk of aspiration.

MPAN is inherited in an autosomal recessive, or less commonly, in an autosomal dominant manner. The phenotypes, or disease characteristics, are indistinguishable between the two types. Both cause a loss of the function of the C19orf12 protein.

Because most of our genes exist in pairs (one from the mother and one from the father), we normally carry two working copies of each gene. When one copy of a recessive gene has a change (mutation) in it, the person should still have normal health. That person is called a carrier.

Recessive diseases only occur when both parents are carriers for the same condition and then pass their changed genes onto their child, resulting in two disease-causing mutations.

For autosomal recessive inheritance, there is statistically a 25% chance that two carriers would have an affected child. The chances are 50% that the parents will have a child who is an asymptomatic carrier and 25% that the child will not receive the gene mutation. Carrier testing for at-risk relatives and prenatal testing for pregnancies can be done if both disease-causing mutations have been identified in an affected family member.

When a disease is inherited in an autosomal dominant manner, only one copy of the mutated gene coming from either parent is needed to cause the disease. Each child of an MPAN-affected individual has a 50% chance of inheriting the mutation that causes the disorder.

A main resource for the clinical information provided here is Mitochondrial Membrane Protein-Associated Neurodegeneration - GeneReviews® - NCBI Bookshelf. GeneReviews is primarily for the use of professionals so the terminology and information may be difficult for the general public to understand.

The TIRCON International NBIA Registry is housed at Ludwig Maximilian University of Munich, Germany, and was created under an EU grant from 2011 to 2015 called Treat Iron-Related Childhood Onset Neurodegeneration (TIRCON ).

The NBIA Alliance and other sources have provided registry funding since 2015. Clinical centers in 16 countries are participants and provide patient clinical data. There are over 700 entries consisting of NBIA patients and controls as of September, 2021, including MPAN individuals. Clinical centers seeing at least five NBIA patients are eligible to participate. Clinical and natural history data is available to researchers studying NBIA disorders. Contact Anna Baur-Ulatowska at Anna.Baur@med.uni-muenchen.de for more information on this registry.

Iron chelator drugs are being explored as a potential treatment for MPAN and other related NBIA disorders. One such drug, deferiprone, was used to treat two MPAN patients, including a 13-year-old. A two-year treatment in that person led to reduced iron content in the substantia nigra, while pallidal iron depositions and clinical status remained unchanged [Löbel et al 2014].

A study involving a related NBIA disorder, PKAN, explored whether deferiprone can reduce brain iron and slow disease progression. This study was done over the course of 18 months and was placebo-controlled. The treatment groups were randomized and the study was completed in a double-blind manner in which neither participants nor the researchers knew which patients were in which group. The results indicated that deferiprone did not lead to statistically significant clinical changes in PKAN individuals, although researchers reported a trend toward slower progression on the dystonia scale used for later onset individuals [Klopstock et al 2019].

Search ClinicalTrials.gov in the US and EU Clinical Trials Register in Europe for information on clinical studies.

Following is a list of recent MPAN research articles.

Other MPAN research articles and studies can be found at Pub Med Central.

2020 - Is there heart disease in cases of neurodegeneration associated with mutations in C19orf12?

2019 - Clinical and genetic spectrum of an orphan disease MPAN: a series with new variants and a novel phenotype