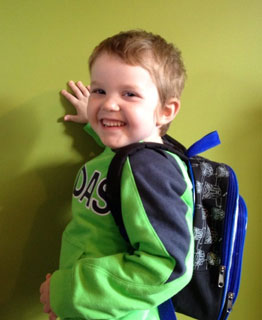 FAHN, or Fatty Acid Hydroxylase-associated Neurodegeneration, is caused by a mutation in the FA2H gene. At present, only a few families have been identified with this rare form of NBIA. Onset usually occurs in childhood featuring leg dystonia, weakness and falling. Affected individuals also experience optic atrophy, profound cerebellar atrophy and white matter changes in the brain, in addition to high brain iron.

T2-weighted MRI views of the brain with findings showing hypointensity of the globus pallidus and possibly variable unilateral or bilateral symmetric white matter hyperintensity. Bone marrow biopsy, although not necessary for diagnosis, may demonstrate accumulation of granular histiocytes.

The diagnosis of FAHN may be suspected in individuals with the onset of hallmark features in the first or second-decade: spasticity, ataxia, dystonia, optic atrophy, eye movement abnormalities early in the disease course and progressive intellectual impairment and seizures later in the disease course. Spastic paraplegia or quadriplegia and pyramidal tract signs, dysarthria (difficulty pronouncing words), and dysphagia (difficulty swallowing) are other features.

Note: Fewer than 30 individuals with FAHN have been reported; the phenotype is likely to expand as more cases are ascertained, and thus the designation of any phenotypic feature as ‘hallmark’ may be premature.

To establish the extent of disease in an individual diagnosed with FAHN, the following evaluations may be useful:

*Neurologic examination for dystonia, ataxia, and spasticity, including formal evaluation of ambulation, speech, and feeding

*Screening developmental assessment, with referral for more formal testing if delay is indicated

Symptomatic treatment is aimed primarily at the dystonia, which can be debilitating. Therapies used with varying success include the oral medications baclofen, anticholinergics, tizanidine, and dantrolene; focal injection of botulinum toxin; intrathecal baclofen; and deep brain stimulation.

More information on these therapies can be found at our Medical Information section of the website.

Attention should be given to swallowing to prevent aspiration and diet with regular measurement of height and weight in children to assure adequate nutrition with gastrostomy tube placement as needed. Assessment of ambulation and speech and communication needs, and ophthalmologic examination also recommended.

FAHN is inherited in an autosomal recessive manner. Because most of our genes exist in pairs (one coming from the mother and one coming from the father), we normally carry two working copies of each gene. When one copy of a recessive gene has a change (mutation) in it, the person should still have normal health. That person is called a carrier.

Recessive diseases only occur when both parents are carriers for the same condition and then pass their changed genes on to their child. Statistically, there is a one in four chance that two carriers would have an affected child. There is a two in four chance the parents will have a child who is also a carrier. The chances are one in four that the child will not have the gene mutation. Carrier testing for at-risk relatives and prenatal testing for pregnancies at risk are suggested if both disease-causing mutations have been identified in an affected family member.

Please see the link in the right hand column on this page for more detailed clinical information on FAHN at Gene Reviews, which was used as a source for some of the above information. Gene Reviews is primarily for the use of genetics professionals so the terminology and information may be difficult to understand for the general public.